Scottish Roots was established in 1984 in Edinburgh by father and son team Tony and Stuart Reid, to provide an ancestral research service for those who wish to discover more about their Scottish forebears - who they were, where they lived and how they were employed.

Scottish Roots now employ a team of researchers all of whom have at least 25 years of experience using records at New Register House, Edinburgh. Tony Reid was head of the Library and Reference division of the European Parliament in Luxembourg.

Stuart Reid is an honours graduate in Communication Studies and is also an experienced researcher having used the records at New Register House since 1984.

One of the features of Scottish Roots is that we would not necessarily restrict ourselves to the 'classic' sources as detailed below. It is not possible to describe here the very wide range of other sources which might be used in our investigations. The major ones are tombstone inscriptions, testaments (wills), obituaries in local newspapers and Post Office directories.

Scottish Roots aims not only to trace your ancestry as far back as possible, but also to explore your family history. We don't supply just names and dates, but also occupations, addresses, religion, causes of death etc.

For illustration, we have included a sample report for you to examine, in order that you can understand the type of information and level of detail produced by our work for you.

Depending on circumstances, we would consult:-

Although civil registration did not start in Scotland until 1855 (eighteen years after England), the information given on Scottish certificates is generally more comprehensive. For example the Scottish marriage certificate can provide a mass of interesting information:- Date and place, religion, full name, age, status, address, occupation for both parties. It should also give the names and occupations of their parents. 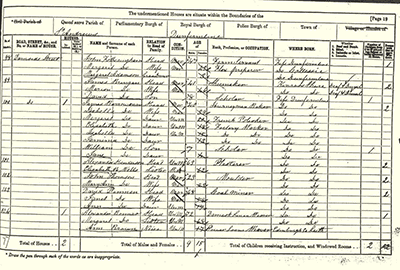 "Reproduced by permission of Registrar General of Scotland"

The census enumerators' returns were (and still are) household surveys carried out every 10 years from 1841. They also provide useful and interesting information such as name, age, occupation, relation to head, and place of birth for every person staying at the address on the night the census was carried out.

These constitute an enormous fund of information for the seeker of family history.

The most recent census returns open to the public are those for 1911. 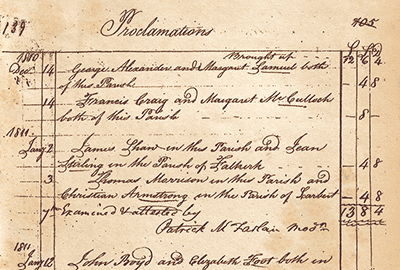 "Reproduced by permission of Registrar General of Scotland"

Before 1855 all records were grouped according to parish - there are just over 900 Scottish parishes in total.

Records vary greatly from one parish to another in availability, quality and legibility. Nevertheless, Old Parish Registers constitute the main source of information prior to the mid-19th century.