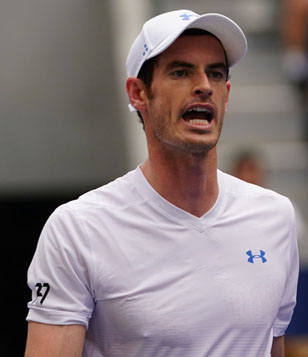 Thanks to intense media attention in recent years, it is widely believed that Andy Murray was born in Dunblane on 15th May 1987. In fact the birth took place in Queen Mother’s Hospital, Glasgow, although his parents, William Murray and Judith Erskine, were by then living in Dunblane. Sadly, this marriage ended in divorce when Andy was a child.

Clearly the sporting influences on the young Murray’s life came principally from his mother, Judy, who is not only a talented tennis player herself but has long been associated with the nurturing of young hopefuls in the sport and has recently announced that she is setting up her own specialized training facility near Stirling. Judy, born in Bridge of Allan in 1959, is the daughter of Robert (Roy) Erskine, an optician who played football for Stirling Albion in the 1950’s, and his wife, Eileen Shirley Edney.

This couple married over the English border in Berwick-on-Tweed (as did the Edney parents in 1931) but are both of Scottish birth (he in Peterculter in 1931 and his wife in Glasgow in 1934). Had they remained in England, and Andy himself been born there, would the English press have been kinder to his rather fiery and ungracious persona of his younger days? Now of course, as success has built on success, he is the golden boy and saviour of Britain’s national esteem, while nonetheless acknowledged as being a Scot first and foremost.

Andy, his older brother, Jamie, also a successful tennis player and a Wimbledon mixed doubles champion, along with two uncles (one, Keith, being a professional golfer) have joined their grandfather in the task of raising the profile of the debt-ridden Stirling Albion Club and are actively involved in the fight to keep it from going under. With such a wealth of sporting talent in the family, it is evident that the Murray brothers have inherited the hand/eye co-ordination vital in their chosen profession, as well as the determination to succeed.

The Erskine family, although now firmly established in the Stirlingshire area is associated with divers parts of Scotland, the Erskine great grandparents (an earlier Andrew Erskine and Isobel Baillie) having been married in the Wigtonshire parish of Penninghame in 1924. Isobel’s father, William Baillie was a teacher in Newton Stewart, while her husband, Andrew, a pharmacist, was also sometime described as a chemist and druggist. Their son, Roy the football playing optician, was born some distance away, in Aberdeenshire.

Although no longer married to Judy, Willie Murray has continued to play a major part in the lives of his sons and has always been supportive of their tennis careers. Stirling born, and not known as a player himself, his professional life has been in the newsagents’ business . His parents, Gordon Murray and Ellen Robertson hail from Kilsyth and Glasgow respectively, and his grandfather and great grandfather were also from the west. William Murray, senior, father of Gordon and a sugar boiler by the time he married Ann Sinclair in Glasgow in 1928, had been born in Rutherglen in 1904 to Gordon Murray and Agnes Lamb, described in the 1901 census as painter’s labourer and power loom weaver respectively. They were both Glaswegians. Although the previous generation of Murrays, William and Ellen McNeill were married in Glasgow around 1847, William was in fact an Aberdonian. A thoroughly Scottish pedigree.