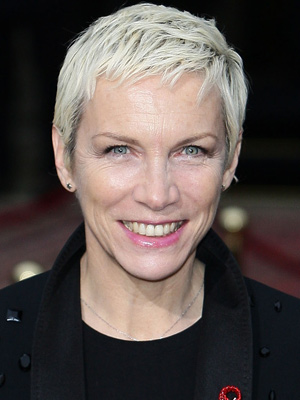 Annie Lennox, an only child, was born as Ann Lennox, in Aberdeen, on Christmas Day 1954. Her father, Thomas Allison Lennox was a boilermaker, and her mother, previously Dorothy Ferguson, had been a cook before her marriage. Annie showed prodigious musical talent at school and, at the age of seventeen, left her hometown after gaining a coveted place in the Royal Academy of Music in London. Despite being considered a very able student, Annie never felt entirely at home in that bastion of classical studies, and did not complete the course. Her success lay in a different direction. But where did the musicality come from?

None of her ancestors was a professional musician. Thomas Lennox was also an Aberdonian by birth, but his father Archibald, although domiciled in the town by the time of his 1924 marriage, was originally from Lanarkshire. The son of a butcher, Archibald was born in Bonkle in the parish of Cambusnethan, and the known Lennox line goes back through the generations to James Lennox, a farmer in Glassford, whose birth, although unrecorded, had taken place around 1760. His son John was farming eighty acres in Glassford in 1861. This family, unremarkable on the surface, may well have included talented amateur musicians but, if so, their abilities were known only within the family circle.

The Ferguson line was well rooted in Aberdeenshire rural life, comprising gamekeepers, saw millers and small farmers or crofters. Annie's maternal grandfather, William Ferguson (1895-1961) hailed from Braemar, and her grandmother, Dora Paton, was a native of Peterhead. When she and William married in 1929, he was a gamekeeper in Leochel Cushnie and Dora was a dairymaid on her father's dairy farm at Cowsrieve. Although their nuptials took place in Aberdeen itself, this couple had the distinction of being married by the then minister of Crathie, whose church has been the regular place of worship for generations of the Royal Family when they are in residence at Balmoral Castle. The two children of this union, Dorothy and Alistair, were both born in Leochel Cushnie - the address for both events being "The Kennels", although not to be taken too literally!

As far as is known, William Ferguson was the only child of George Ferguson, who was employed as a saw miller in Invercauld, Braemar, and his wife Sophia Farquharson. A slight hint of deception lies here, as George described himself as a forty-four year old bachelor when he married Sophia at Corgarff in 1895, when in fact he was a widower and she was his second wife. He died at the home of his son and daughter in law (the aforementioned "Kennels" at Leochel Cushnie) in 1931, his death certificate showing that he had been married first to Lizzie Clark. He himself was illegitimate, so perhaps was accustomed to secrecy, but illegitimacy did not carry much of a stigma in that area in those times. In some circles, it was even considered a positive asset to marry a woman who had living proof that she was capable of producing children who would provide cheap labour on the family croft. Aberdeenshire and Banffshire had a high illegitimacy rate in the nineteenth century. Another illustration of this is seen in Annie Chalmers from Peterhead, who was herself the child of an unmarried mother and was to become the mother of Dora Paton.

Little is known of George Ferguson's father, the earlier William, but his mother, a poultry maid named Isabella McHardy, never married. Her death, at the age of eighty-three, was quaintly described as "an attack of gastritis due to over feeding". She came from Tomintoul, which vies with Wanlockhead as being the highest village in Scotland, and was where her son George was brought up by his maternal uncle, Charles McHardy, and his wife Jane. This couple had three daughters and at least three sons. A headstone in Braemar churchyard shows that one of the sons, Alexander, died in Africa aged thirty years. Charles and Jane lived until 1920 and 1926, respectively.

When Annie Lennox first left Aberdeen and went to live in London, did she know that her father's maternal grandparents also had connections with that area? Charles Henderson and Alice Manners had been married in West Ealing in 1890, and it is believed that Alice may have been English. Charles was a victim of heart disease at the relatively young age of forty-one, when his daughter Jeannie was just two years old. At that time, he was a church verger and lived in Aberdeen's Gallowgate. The brother who notified this death in 1908 lived at the charmingly-named "Dancing Cairn", Whitehills, a coastal village to the west of Aberdeen and over the boundary into Banffshire.

The young widow, Alice Manners, ultimately remarried the also widowed George Duncan, in Aberdeen in 1912. This marriage took place at St. Paul's Episcopal Church, Aberdeen, the Episcopalianism being perhaps a legacy of her English mother. Annie Lennox is now based in England, so that particular family line has come full circle.