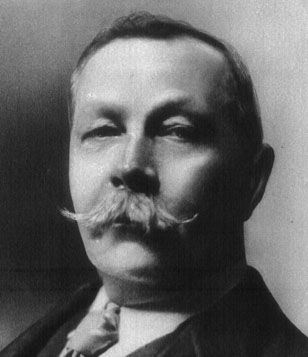 While Arthur Conan Doyle is renowned world wide as being the creator of Sherlock Holmes, not everyone is aware that, although of Irish parentage, he was in fact born in Edinburgh and educated there and at a Jesuit school in England. He first saw the light of day at 11 Picardy Place, his father being Charles Altimonte Doyle and his mother, Mary Josephine Foley. Charles and Mary had married in St. Mary’s Roman Catholic Cathedral , Edinburgh in 1855; the first year of compulsory registration of births, marriages and deaths in Scotland, in which more detail was demanded than in any subsequent year. At that time Charles Doyle was described as an architect, living in Nicolson Street, Edinburgh, and the 18 year old Mary Foley was residing a few miles out of town in Durham Lodge, Bonnyrigg. The additional information showed that Charles had been born in Bayswater, London and his bride in Waterford, Ireland.

Arthur was the third of this couple’s nine children, the others being Annette, Katherine, Mary, Caroline, Constance, John, Jane and an oddly named sister, Bryan. This was not however a happy family as their father had a drink problem which increased as the years went on and after struggling to cope with his violent mood swings and seriously erratic and threatening behaviour (carefully concealed from those outside the family circle) , the family split up. Charles was still living with his wife and children at 3 Sciennes Hill Place, Edinburgh in 1871, no longer an architect but employed as a 2nd clerk in the Civil Service (H.M. Works), perhaps an indication of his slide down the social scale.

The next we hear of Charles Doyle is in the 1881 national census when he was one of eighteen boarders in the fifteen roomed house of a farmer on 221 arable acres in Glenbervie, Kincardineshire. The suggestion here is of some kind of private care home which employed five domestic servants, not exactly an institution but where those requiring supervision of one kind or another could be despatched to the country and got out of harm’s way. He then had described himself as “architect and artist”. Deteriorating further, Charles was ultimately detained in the Crighton Royal in Dumfries, known in the harsh terminology of the times as a lunatic asylum. There he died in 1893.

Meanwhile, Arthur (who added his middle name of Conan to his surname) had become a medical student at Edinburgh University. He was not the first in his family to follow that route as his maternal grandfather, William Foley, had also been a doctor. There he came under the influence of Dr. Joseph Bell, whose methods of logical deduction in diagnosis were later applied to Sherlock Holmes. Arthur took what would now be known as a ‘gap year’ during his studies when he embarked (literally) on a whaling expedition to the Arctic Circle. Although benefitting from the experience he was horrified at the barbarity of the actual whaling procedure.

It was also when at University that Conan Doyle tried his hand at writing, starting with short stories. He always maintained that he had inherited his storytelling gift from his cultured and well educated mother, Mary Foley, who had an Irish landowning family background. Perhaps there is some truth in the ‘gift of the gab’.

On graduation Arthur Conan Doyle’s medical career took him away from Scotland, where he is commemorated by a statute of Sherlock Holmes standing in Picardy Place, and also by a pub in the area.