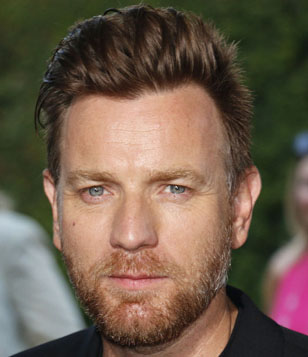 Search for Ewan McGregor in Google and the first fact which hits you is incorrect. Most sites state that he was born in Crieff on 31st March 1971, while in fact he first saw the light of day in Perth Royal Infirmary. His family was however based in Crieff; Ewan being the younger of the two sons of James McGregor and Carol Lawson, both school teachers. The McGregor line can be traced in the area for several generations, going back to Duncan McGregor, Ewan's great-great-greatgrandfather, who was born in Fortingall in the early nineteenth century.

Duncan McGregor was a tailor, who lived with his wife Betsy Hunter in the village of Fowlis Wester. Betsy bore eight children before dying of consumption in 1859 at the age of fifty, and although he was still listed in Fowlis Wester in the 1861 census, Duncan thereafter disappears from the records. Neither he nor his son, Duncan junior (born circa 1856) are to be found in Perthshire in 1871 and 1881, and there is no trace of the death of the father anywhere in Scotland. Where did they go? Were they part of the great army of Scots who emigrated, or perhaps they merely went to live with a married daughter south of the border.

Alexander, the oldest child of Duncan and Betsy, was a ploughman, who, with his Edinburgh-born wife, Janet Stewart, had nine children in eighteen years. The youngest of these was James who forsook agriculture and became a mason, living in Crieff and dying in Bridge of Earn in 1960, having outlived his wife - Emily Cramb - by seven years.

None of these ancestors was, on the surface, remarkable although doubtless, tales could be told of each which would mark them out in their individual ways. Nonetheless, it was James Peter McGregor, the son of James and Emily, who stands out from his forebears. Born in Crieff in 1916, James married Isabella McMillan Clark MacIndoe at Headless Cross, Gretna in 1936; this marriage bearing the hallmarks of an elopement or at least, a secret or furtive wedding. Married "by declaration" i.e. in front of witnesses, these marriages did not require banns or proclamations and as such could take place more speedily than by going along the conventional route. After later appearing in front of a sheriff and attesting that there was no legal impediment to the union, a warrant would be issued which enabled the marriage to be formally registered.

Neither party was underage, James being aged twenty and his bride, twenty one, comfortably beyond the Scottish age of consent. The relative occupations of the groom and his new father in law do perhaps hint at parental disapproval, James being a ship steward at the time and the bride's father being described as 'Chilean Consul - retired'. This conjures up images of a clandestine shipboard romance beween a crew member and the sheltered daughter of the Chilean Consul; perhaps even on a voyage to or from Chile.

By the time of Isabella's death, as recently as 1998, her father was said to have been 'Chancellor Chilean Consulate' while James had evidently become a mechanic: still quite a disparity. Although he was said to have been an electrical engineer on marrying Mary Forrester Clark in Glasgow in 1906, on Isabella's 1915 birth certificate, John Charles McIndoe was then described as 'Chancellor - Chilean Consulate'. His birth cannot be traced in Scotland, nor were he and his parents, Robert McIndoe (a civil engineer) and Wilhelmina Landmann, included in any Scottish census return in 1891 and 1901.

Most intriguing of all, when his own death was registered in Perth in 1962 (by which time he was domiciled in Crieff), it was stated that John McIndoe had formerly been known as 'Juan'.On that occasion, his mother's maiden name was shown as 'Kraus'.

James Charles Stewart McGregor - Ewan's father and the grandson of 'Juan' MacIndoe, married a fellow school teacher, Carol Lawson, in Crieff in 1966. Recent television documentaries have featured their elder son, Colin, in his role as an RAF pilot, far removed from his home town and the lifestyle of his better known younger sibling, although equally dramatic. Drama in fact runs through the genes, the maternal uncle of the McGregor boys being Denis Lawson, the acclaimed Scottish actor (possibly best known to the general public for his role in the film "Local Hero") and Carol McGregor herself is involved in the world of film-making.

No earlier thespians are apparent in the Lawson family tree, the father of Carol and Denis being a Glasgow watchmaker and jeweller, Laurence Lawson, born there in 1918. He too died in Crieff. He lost his mother - Diana McCulloch Brown - at an early age, when she died in 1920, following childbirth, but his father, Alexander Dobbie Lawson, lived for a further forty years, dying in 1960. Alexander was the son of an earlier Laurence Lawson, a Glasgow born upholsterer.

The chosen career of Ewan McGregor has taken him far from his Scottish roots but his settled and stable family background has no doubt helped to keep him grounded to a degree as he appears not to have succumbed too much to the 'luvvy' ethos. It would be interesting though to follow him to Chile on one of his motorcycle marathons.